'Fungi Fest' in the British Virgin Islands: It's Not About Mushrooms!

If you've never been to the British Virgin Islands, you might think their 'Fungi Fest' is a culinary event featuring mushrooms. Fungi (foon-gee) is actually the traditional folk music of the BVI’s. And it’s a lot more lively than edible fungus!
Also called 'scratch' music, according to BVI Tourism, fungi music is deeply rooted in African heritage, but also with Euroepan influences. It’s described as “a combination of string and percussion instruments complemented by woodwind and storytelling vocals.” Fungi is also the local music of the neighboring U.S. Virgin Islands (USVI).
There is, in fact, a culinary connection – but still, no mushrooms! The name fungi comes from a BVI dish, ‘fungi and fish,’ a ‘cook-up’ including cornmeal, onions, peppers, and okra. The music/food connection comes from the idea that bringing together these different savory flavors creates something entirely new, just as a fusion of a wide range of instruments and styles of music created a new type of music.
Fungi music features a range of instruments, some even homemade. You may see and hear the distinct sounds of ukuleles, banjos, guitars and bass, as well as bongos, washboard, calabash, keyboards and saxaphones. It’s not just music to your ears – it’s music made to dance by!
Fungi music is a part of the way of life in the Virgin Islands, with the rhythms of fungi bands marking life milestones like weddings and celebrations as well as livening up local parties, hotel and resort evenings and restaurants. 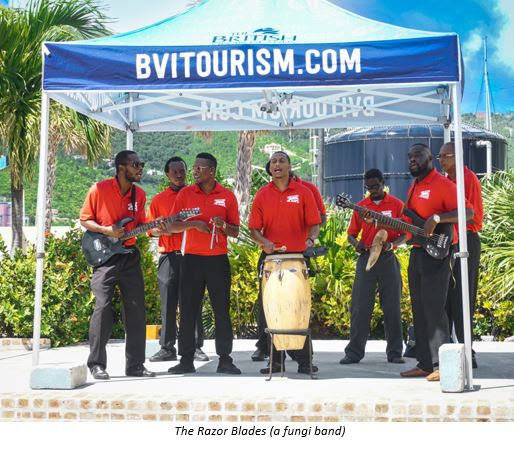 Perhaps the best way to immerse yourself in the Virgin Islands’ fungi music tradition is to go ‘all in,’ at ‘Fungi Fest’ in Tortola in the BVI’s (pictured above, courtesy of BVITourism.) The annual, November music festival has returned to the BVI’s largest and most populated island. For two weeks, fungi bands from the Virgin Islands as well as Anguilla, Nevis and other surrounding islands light up the stage at the Cyril B. Romney Tortola Pier Park. The Fungi Fest is part of the BVI’s broader Culture and Tourism Month.
If you haven’t ever visited the BVI’s, come for the fungi music and stay for the 60 islands and cays of this off-the-beaten-path archipelago in the Caribbean. In addition to Tortola, the gateway to the BVI’s, you may have heard whispers of sophisticated island travelers heading to Virgin Gorda, Anegada, and Jost Van Dyke.
Those in the know consider the BVI’s the ‘sailing capital of the world,’ with annual regattas, boat and yacht charters, not to mention yacht-watching, as the international sailing set breeze in and out of port. You can base yourself on land, in exquisite resorts by Rosewood, Autograph Collection, Wyndham or exclusive boutique hotels and private islands – or ask your trusted travel advisor how you can split a trip to the British Virgin Islands between land and yacht. Small ship cruise lines also call at Tortola and let you sample a unique island life – complete with the rhythms of fungi.

By: Lynn Elmhirst, cruise/ travel expert and journalist
﻿Top image: World's Greatest Cruises
All rights reserved. You are welcome to share this material from this page, but it may not be copied, re-published, broadcast, rewritten or redistributed.

Save up to 50% on a Festive, 5-Star Family Holiday at Nickelodeon Hotels & Resorts